My Creativity Games and Exercises 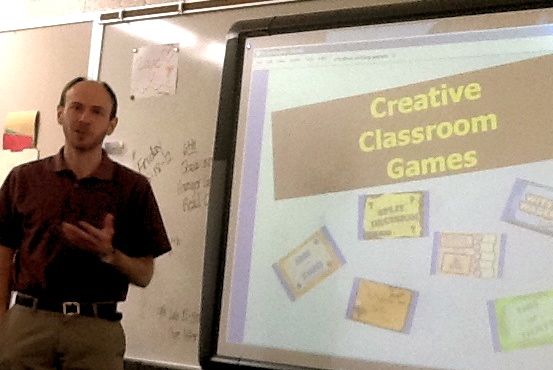 When it comes to me as an artist--one who gets big ideas, brings them into reality and shares them with others--my biggest success would have to be my work as a game designer. For fifteen years I poured myself into the art of game design.

I wasn't so much into computer or video games, though I made a few simple ones. Mostly I worked on traditional board and card games. Many of my creations didn't go far, but I had a couple party games that trickled around the planet, making life a little more fun for thousands.

In 2004 a friend and I worked on a creativity system that spawned several highly entertaining games. Most of them can be played with just some paper and pencils. (They weren't the type of thing we could sell, so I had to keep my day job!)

Players supply the best part, which is the creativity that breathes life into the play.

In 2008 the school district where I work purchased interactive whiteboards and classroom response systems. I saw the possibility of using those tools to adapt our creativity game into classroom presentation games. That way a large group could enjoy the fun together. Those games play sort of like interactive TV game shows.

I've written extensively about the games and posted examples on my other blog. See the links at the end of this article if you are interested in those games.

For purposes here, I just want to talk about the simple concept behind the games and what it offers.

In our creativity game system, players were presented with two random items and from that they would make up creative responses. One player would act as a judge and pick his or her favorite responses.

For example, in the riddle game (eventually published as Why Did the Chicken...?) players are presented a riddle starter and two random nouns. It makes silly questions like, "Why is Santa Claus afraid of Einstein?" Players compete to give the best answers to those riddles.

The concept of the prompt was that simple--just pair two random things--but the results were astounding. I still can't believe the number of entertaining hours I have enjoyed with friends as I put different shells over that basic skeleton.

I eventually turned the games into some creativity exercises and I built a presentation around them. I shared the presentation with classes in my district and I posted a version on my Classroom Games and Tech blog. It has been my most popular post by far.


I learned a few very important things in sharing that activity with students.


Just practicing that simple exercise brings out fun and surprise for the students I've worked with. Comments I've received on feedback surveys indicate they liked practicing creativity and they plan on continuing to practice it.

I usually take one class period to give my presentation, introduce the exercises and then play some games. It can be done in smaller pieces too, though, so I encourage all teachers to look for ways to introduce such concepts and exercises to their students.

As I often point out, we don't grade on creativity in most classes. Still, it's like oil is to a machine. Oil is not the goal of the machine, but without it the system begins to wear down.

Anyone teaching secondary students can see the school machine coming to a standstill for many students and I believe lack of creativity is one big reason why.

Hopefully we can all do our part, possibly through simple, fun games and exercises, to infuse a little more life in the system!


Here are links to resources for from my other blog: