Opening or Closing the Doors of Opportunity 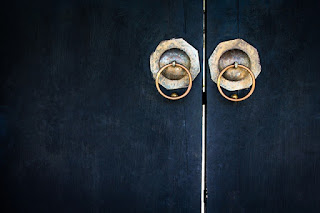 I came across a fascinating summary of a study that was done in 2014. If I summed up the general finding, every teacher I know would nod in approval and ignore it. It's one of those things we know, but I think we forget how powerful it is.

This study really drove it home for me. I'm describing it as Jo Boaler did in her book Mathematical Mindsets. (It's also on her website here.)

Hundreds of high school students were given an essay assignment. The essays were read and comments were written on each one as to how the students could improve their work.

But half the students were given an additional sentence at the end of the feedback. They were selected randomly and the teachers did not know who received this extra sentence.

A year later, those students were receiving significantly higher grades.

So all the kids do this assignment, a random half of them get a single sentence added to their comments. No matter who those students have for teachers the next year, they are performing better.

What was this powerful sentence that made such a difference?

"I'm giving you this feedback because I believe in you."

Do you feel the weight of what that means for us? Doors of opportunity open and close as we communicate to students that we believe in them. Or that we don't.

Boaler explains that the point here isn't to start using that phrase like it's magic. Certainly it would lose its power. The point is that every student we work with must be convinced that we believe in him or her.

Here's the beauty and challenge--the art--of this: The ones who are hardest to convince are also the ones that could be most impacted. That's where we'll change a story and make an impact.
Posted by mpetty39 at 11:04 AM