No One Could Blame You 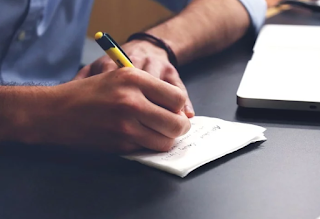 Last year I read a tip on the Faster to Master site has been helpful. The author suggested reflecting on your wins from each day. I've been terrible about doing it on a regular basis, but I've been more conscious of the wins since then. I want to share a story about one of them.

The win is what mattered to me, not the details of the surrounding story. So forgive me if I'm being vague about what might seem like the juicy parts. I'm trying to be brief and avoid naming names.

Last month I'd been dabbling in fiction writing and (as always) reflecting on how we can use those same ideas to make meaningful stories in our lives. At this time I was thinking about theme as opposed to the plot of the story. What would be a good theme for a story? What's the theme of our lives?

One morning before work I was musing on all that. I considered a story with the theme of pressing on when the going is tough. (I didn't say I was a very original fiction writer.)

I had time for no more details than this:  At a key moment, someone would say something like, "No one could blame you for giving up. But maybe that's why the choice has come to you."

That seemed potentially epic, so I wrote that down just to remember it. Then I went on with my day.

Two hours later I was helping a teacher prepare for student presentations in one of our collaboration areas. We were chatting about work as we set up. We've known each other for years and we usually talk openly. I mentioned a particular task I was consciously avoiding at work. In fact, I probably said I refused to do it.

Without explaining, she well understood my resistance to the task. It was because of an awkward moment that happened in a staff meeting months earlier. That's the part of the story I won't elaborate on, but we've all been in staff meetings. You know about awkward moments, right? I'll just mention "power struggle" and "poor communication" and leave it at that.

Probably every person who was in that meeting remembered the moment. I bet most of them would have caught my implication that it was still an obstacle for me months later.

Then after I said I wouldn't do the task anymore, this teacher said the thing that caught my attention.

With a knowing chuckle, she said, "No one could blame you."

Well, there it was. No one could blame me. In that second my life intersected with the fiction I dreamed up earlier. What fool would I be if I didn't act on it?

I decided I better talk to the principal and make plans to do that that task I'd been avoiding. A few weeks later I did it, in front of the same staff, in the same place as the awkward meeting. Though I didn't mention any of the backstory, I'm sure at least four of us in the room understood the significance of my brief presentation.

I don't know if the particulars of those events will ever matter or if anyone will remember them besides me.