I'm doing a series of short posts during the holiday break.

Artists create. Some paint pictures or compose music. Some (probably not thought of as artists) work on the canvas of daily life. They intentionally shape the culture of their environment. 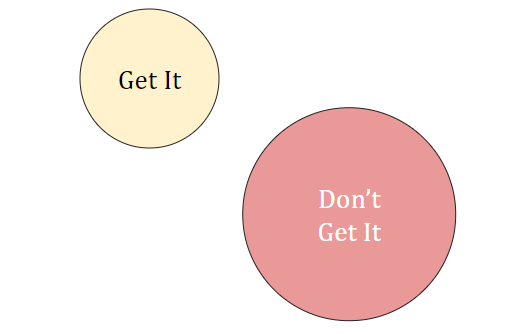 When I'd talk with district leaders about staff or students, or my brother who pastors a church, I used to say the following when it comes to leadership and culture.

Think of people in your organization who "get it". Don't worry too much about what it means to get it. Just think of a few of them. You know who they are. Then think of the group of people who don't get it. Maybe they're a much bigger group, maybe not.

So the big question I always posed was:  Q1:  What do people in the Don't Get It group see and hear regularly that makes them feel it's important to move to the Get It group?

The key words are see, hear, regularly and feel. Feel is probably most important. Without using the terms, this is really touching on the (possibly unspoken) core values of the organization. It addresses messaging and mission.

But lately I realized there's another side to this--another question that must be addressed. It's just as important to also consider Q2:  What do the people in the Don't Get It group see and hear regularly that makes moving to the Get It group feel like too much work?

See, a lot of people don't live up to their potential because they're convinced other people and circumstances will undo their hard work. They might not state it this way, but that feeling is a culture drain. It's drag on the vehicle in the race toward greatness.

If you're not sure what the energy killers are in your organization, just listen to the people most comfortable in the center of the Don't Get It group. Those people love to point out what's holding everyone back. They chant them in grumbles, wrapping themselves in "why bothers" like cozy blankets.

You will never eliminate all the possible answers to Question 2. Instead, the task is to move forward despite the resistance. In other words, make sure your answers to Question 1 are more pervasive in the organization than the forces uncovered by Question 2. Like strokes on a canvas, make it happen one small win at a time.

Email ThisBlogThis!Share to TwitterShare to FacebookShare to Pinterest
Labels: leadership